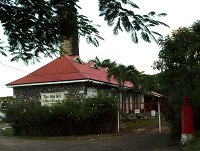 The Old Mill Cultural Centre was officially established in 1985 to provide facilities for the administration of the arts and culture in Dominica. The establishment was also intended to be a centre of learning on the island in the various artistic disciplines. The centre is also a tourist attraction. It is a beautiful example of environmental, architectural and cultural heritage.

Apart from the offices of the Cultural Division, the centre now houses a museum, a folk research centre, a sculpture workshop and a dance studio.

The Old Mill Cultural Centre used to be an old mill owned by British settlers and during the late 18th and 19th centuries produced sugar, rum and molasses. Later on in the early 20th century, after the sugar industry collapsed, Andrew Green, the new owner of the estate, reactivated the mill as a lime plantation in 1908. In 1964, the entire Canefield estate was sold to the Government of Dominica.

In 1976, a portion of the mill was donated to the then National Arts Council for use as a cultural centre. With a grant of five thousand dollars ($5,000.00) from the British Development Division, the Arts Council made improvements to the old mill building and grounds and held cultural shows and exhibitions.

Unfortunately, the new work efforts were thwarted by Hurricane David in 1979. The Old Mill, like the rest of Dominica received quite a lashing from the hurricane. In 1980 however, restoration work began on the centre with funds from USAID and in 1985 the Old Mill Cultural Centre was formally established.